Palestinians celebrate the victory over Israeli measures at Al-Aqsa Mosque 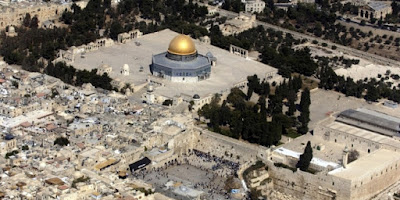 Palestinians gather to celebrate the Israeli removal of metal detectors that were
installed after a deadly shooting inside the shrine.

In addition to newly installed railings and scaffolding where cameras were previously mounted have
now also been removed from at least one main entrance to the Haram al-Sharif compound.

A tense standoff has been underway between Israel and Muslim worshippers at the holy site despite the removal of metal detectors on Tuesday, with concerns of major unrest later this week if no resolution is found.

It was unclear whether Muslim authorities would now grant approval for worshippers to re-enter the site, which houses the revered Al-Aqsa mosque and the Dome of the Rock.

However, Palestinians are very happy after days of tension. They refused to enter the site and pray outside in streets protesting Israeli measures that are seen as a move in asserting further control over the site. This situation leads to more tension and clashes between Israeli forces and protesters. As a result, Israeli forces killed Palestinians and dozens injured in addition to violent arrests in many Palestinians towns and villages.

It follows with intensive international diplomacy and warnings of the potential of wider unrest if Israel did not resolve the status quo.

Now Palestinians celebrate their victory. They gather at the entrance and young men set off firecrackers, with whistling and constant horns from cars.

Firas Abasi said he felt like crying over the “victory”.
“For 12 days no one has slept, no one has done anything except the Al-Aqsa mosque,” he said.