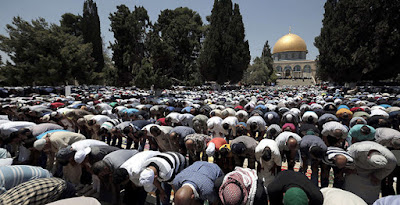 Israel’s decision to ban Palestinian Muslims from praying in al-Aqsa Mosque in
the old city of Jerusalem on Friday, in the wake of an earlier shooting attack had outraged the Palestinians, who called for large protests, demonstrations, and rallies.

Israel closed al-Aqsa Mosque in the old city in east Jerusalem on Friday after three Palestinian gunmen opened fire at an Israeli police force in the old city, where the exchange of fire between the two sides expanded to the yard of mosque. The three were killed and three policemen were injured, two critically.

Islamic Hamas movement’s spokesman in Gaza Hazem Qassem said in an emailed press statement that his movement welcomes and hails the shooting attack in Jerusalem, adding “the operation (attack) is evidence that our people and its political trends are ready to sacrifice their blood for the same of al-Aqsa Mosque.”

“(Israeli Prime Minister Benjamin) Netanyahu’s decision to close al-Aqsa Mosque in face of thousands of prayers and preventing them from Friday prayers in the mosque shows that he (Netanyahu) is blundering and every Israeli action against al-Aqsa Mosque will be strongly confronted.”

Following the attack in the old city, the Israeli police shut down the gates that lead to al-Aqsa Mosque and prevented the Palestinians from entering into the yard of the mosque. Tens of thousands gathered in the streets that lead to the old city, and protested the closure of their mosque.

Palestinian President Mahmoud Abbas spoke on Friday with Israeli Prime Minister Benjamin Netanyahu on the phone and expressed his condemnation to the shooting attack in the only city of Jerusalem.

The Palestinian state-run news agency (WAFA) reported that Abbas expressed to Netanyahu his extreme rejection and condemnation to the attack that was carried out at al-Aqsa Mosque in the old city of Jerusalem.

“President Abbas expressed to Netanyahu the complete rejection to any violent action, no matter who carried it out, mainly in places that are used for worship,” said (WAFA) report.
The report also said that President Abbas asked Netanyahu to cancel all the Israeli measures are taken to close al-Aqsa Mosque before tens of thousands of Muslim prayers on Friday.

Abbas warned that the Israeli measures “may lead to negative consequences and might be used by other groups to change the religious and historic position of the holy places.
Meanwhile, the less-influential Islamic Jihad in Gaza said in an emailed press statement that it welcomes “the heroic attack in Jerusalem that was a natural response to the Israeli measures in Jerusalem.” However, the group warned Israel of closing al-Aqsa Mosque and it said, “it will   forcibly." confront the measure

The Popular Front for the Liberation of Palestine (PFLP) and other minor Palestinian factions welcomed the shooting attack in Jerusalem and condemned the closure of al-Aqsa Mosque before Muslim worshippers during Friday prayers.

(WAFA) news agency report said that Abbas made a series of phone calls with Jordanian, Arab and international officials urging them to pressure on Israel to cancel the Israeli measures of closing al-Aqsa Mosque for prayers.