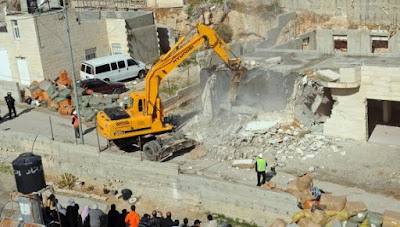 Many army jeeps and bulldozers, in addition to police officers and workers of the City Council invaded Shu’fat neighborhood, after isolating it, and demolished a home and a barn, owned by Saleh Abu Khdeir.

Abu Khdeir told the Wadi Hilweh Information Center in Silwan (Silwanic) that his home was 115 square meters and was built in 2006, but he and his family were only able to inhabit it in 2012, after completing all the needed work and furnishing.

He added that the City Council issued the demolition order in October 2017, but Abu Khdeir managed to obtain a court order halting the demolition until further deliberations are held, but the soldiers went ahead and demolished the property.

The house that funded by UN  was owned by Hani Abu-Eweeda and a 13-member family lived inside it.

The Palestinians who owned these buildings did not get a prior notice by the Israeli authorities.

These measures are part of an Israeli plan to evacuate the area from its Palestinian residents so it can carry out the 12,000-dunam Israeli settlement project E1 which will separate East Jerusalem from the West Bank.
EU member states have previously denied the Israeli policy of targeting Palestinian facilities built
with EU funds in area C, which is fully under Israeli occupation control, considering it opposed to international law.