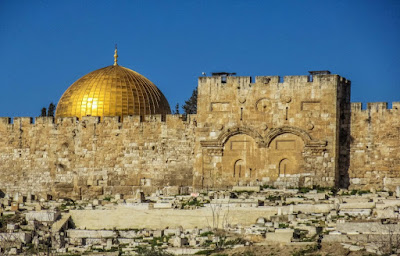 The Palestinian Foreign Ministry on Monday condemned the Guatemala`s decision to move its
embassy to Jerusalem and it described this move as” shameful “.

“It’s a shameful and illegal act that goes totally against the wishes of church leaders in Jerusalem”
and violates a non-binding UN General Assembly resolution condemning the US move, the ministry said in a statement.

“The state of Palestine considers this as a flagrant act of hostility against the inalienable rights of the
Palestinian people and international law,” it added.

“The state of Palestine will act with regional and international partners to oppose this illegal decision,” the ministry stressed.

Guatemala’s President Jimmy Morales announced that the Central American country will move its embassy in Israel to Jerusalem, becoming the first country to follow the lead of US President Donald Trump in ordering the change.

Guatemala was one of nine countries that voted with the United States and Israel on Thursday when the UN general assembly overwhelmingly adopted a non-binding a resolution denouncing Washington’s recognition of Jerusalem as Israel’s capital.

No other the country has their embassy for Israel in Jerusalem, though the Czech Republic has said it is considering such a move.

US President announced early December that Washington would be recognizing Jerusalem al-Quds as Israel’s capital, stressing that the United States would relocate the embassy in the occupied lands from Tel Aviv to Jerusalem al-Quds.

The move was hailed by Israel but condemned by the rest of the international community as one which undermines the peace talks.

Washington’s al-Quds move has raised a chorus of outcry across the international community. The Muslim world, the UN, world leaders from Europe to the Middle East to Australia and even US allies in the West have criticized the bid, saying it would plunge the already tumultuous region into new upheaval.

The Organization of Islamic Cooperation (OIC), in a statement issued following an extraordinary summit in Turkey’s Istanbul, declared East Jerusalem the capital of Palestine “under occupation” and urged the US to withdraw from the peace process and back down from its Jerusalem decision.

The United Nations General Assembly (UNGA) overwhelmingly passed a non-binding a resolution condemning US President’s decision and called on states not to move their diplomatic missions to the sacred city. Only nine countries voted directly against the resolution, while 56 others either abstained or did not cast a ballot. The UN resolution passed overwhelmingly in the body’s General Assembly with 128 countries voting in favor of it.

The UNGA vote followed the US veto of a UN Security Council (UNSC) resolution. All other UNSC members voted in favor of a motion to rescind Donald Trump’s move.