Israel Issues an Order to Confiscate Palestinian Lands in Nablus 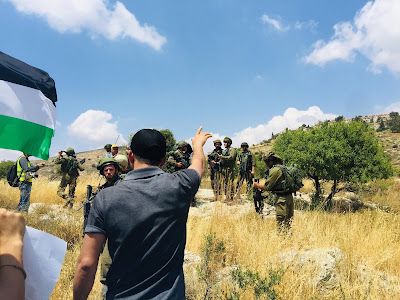 Scores of  Palestinians demonstrated afternoon Friday in a protest against an Israeli order of seizing
20 dunams of Palestinians land in  Deir Alhatab and Azmout villages in the south of Nablus.

This order comes for the settlers purposes to open a bypass road for illegal settlement  Alon Morey  which also will prevent Palestinians land owners to access to their lands that exist behind the road.
Locals  said that Israel attacked protesters and injured 5, one of them a journalist using sound bombs and rubber bullets.

Ghassan Daghlas, an official who monitors settlement activity in the northern West Bank, told Palestine TV that Alon Morey settlement was one of the isolated settlement according to the classification of Netanyahu but giving the American green light from  president Trump encouraged every settlement to expand on the context of Palestinians land. “

He added that Palestinians who want to go to their lands behind the road, need to have permits to access through this road which Israel declared it as a closed military zone.” 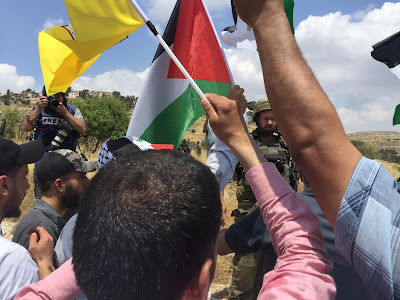 The bypass road is one of the Israeli open policies  that put into practice after Oslo agreement between Israelis and Palestinians in 1993  for the sake of building roads to military and settlers use.

It is noteworthy that building bypass roads completely depend on verbal orders are given to soldiers and not stated in legislation or official papers.

According to a report  published by B’Tselem said that these bypass roads are discriminatory and violate two fundamental human rights: the right to equality and the right to freedom of movement besides humiliating Palestinians on checkpoints and many restrictions that confiscate Palestinians daily life.

However, Israel intensifies working to increase constructing bypass roads inside the occupied Palestinian territories to connect the Israeli settlements with each other and segregate the Palestinian communities and towns as a part of its policy to seize control over the Palestinian land and impose facts on the ground.