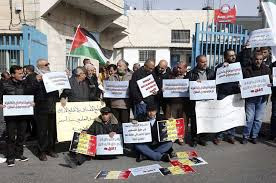 Scores of UNRWA employees demonstrate today Monday against US policy in cutting the fund to the agency.

In a speech by the head of UNRWA staff union, Ameer Al-Meshal said that U.S fund cuts threaten to put the vital services at risk and he called to enable UNRWA to carry out its duties towards Palestinian refugees.

The development of UNRWA crisis comes after Trump decision to withhold $65 million of a planned $125 million funding installment. “We would like to see some reforms be made,” said State Department spokeswoman Heather Nauert, adding that changes are needed to the way the agency operates and is funded. “This is not aimed at punishing anyone.”

Prime Minister Benjamin Netanyahu praised the move and accused the agency of perpetuating the Palestinian refugee problem and narrative of erasing Zionism, "This is the first time this thing is challenged. It’s a good thing that they’re moving forward and challenging this body.”

In contrast, The Israeli army warned the government in a report that without US financial aid, the PA “would find it difficult to maintain the capabilities of its security forces and [then] its desire to continue coordination with Israel.”

While Palestinian officials considered this decision to put additional pressure on PA after the late criticized U.S biased policy and called for alternative just peace broker.

Trump decision to recognize Jerusalem, the capital of Israel has angered Palestinians and has been condemned by many European and Arab counties and it was rejected by U.N because it violates the International conventions and threatens peace in the middle east.

The Palestinian envoy to Washington, Husam Zomlot, said, “Palestinian refugees and children’s access to basic humanitarian services, such as food, health care, and education, is not a bargaining chip but the US and international obligation.” He added, "Heeding Israeli Prime Minister [Benjamin] Netanyahu's zero-sum game to take Jerusalem off the table and now attempting to dismantle UNRWA, thinking that it would relinquish the rights of Palestinian refugees is a fallacy."

The UN’s aid agency for Palestinian refugees announced last Wednesday the launch of an international fundraising campaign to cover the shortfall in the budget caused by the US decision. In the statement, the Commissioner-General, Pierre Krahenbuhl warned that “this reduced contribution threatens one of the most successful and innovative human development endeavors in the Middle East.” And he called on the agency’s partners, including host countries and donors to continue to support UNRWA and in creating new funding alliances and initiatives to ensure the continued effectiveness of its programmes. "At stake is the access of 525,000 boys and girls in 700 UNRWA schools and their future. At stake is the dignity and human security of millions of Palestine refugees [and] access of refugees to primary health care, including prenatal care and other life-saving services,” added Mr. Krähenbühl in the statement.

Palestinian refugees who live now in a serious situation that faces a drastic deterioration in different aspects of life due to Israeli policy that violated International agreements and stands as a blocking obstacle against peace and prosperity of Palestinians.

Nafez Barakat, A Palestinian live in Gaza strip said, " If they cut the aids, we will not be able to live. We depend on UNRWA that is obliged to provide services because we are refugees ."

United Nations Relief and Works Agency for Palestine refugees (UNRWA) was established by the U.N. General Assembly in 1949 after hundreds of thousands of Palestinians were expelled from their homes in the 1948 war that followed Israel’s creation which Palestinians call it the "Nakba". The agency focuses on providing health care, education, and social services to Palestinians in the West Bank, Gaza Strip, Jordan, Syria, and Lebanon. And it aids five million registered Palestinian refugees in the Middle East.